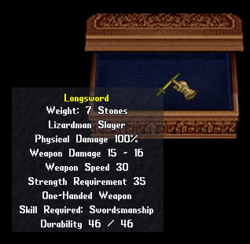 An Example of a Creature Specific Slayer

The Slayer property is found on certain melee weapons, instruments, talismans, and spellbooks. This property will do the following when used in an offensive manner:

The Slayer property can be found as a rare drop in monster loot or crafted by a character when using Runic Tools. Slayer instruments can only be found on monster loot. A slayer spellbook however can only be crafted by scribes using a scribe pen (assuming they have a high level of magery) or in artifact form.

Player crafted spellbooks have a chance to have properties from any slayer groups. You must have the spellbook equipped to receive the double damage bonus from most direct damage spells, and slayers granted by spellbooks only effect spells that make use of Evaluating Intelligence in their damage formulas (notable exceptions are Mind Blast and Harm). Note that Necromancy and Spellweaving spells are also not included.

There are two types of slayers, Super Slayers and Lesser Slayers. Super Slayers are effective against a large group of different, but racially or elementally similar, creatures. The Super Slayer comes in two forms: Talisman-based and instrument/spellbook/weapon-based.

Talisman Slayers do not affect spells. The Damage Increase from both talisman-based and instrument/spellbook/weapon-based forms is cumulative, or stacks, subject to the 300% cap.

In a mechanic of the game that was long thought dormant but not, each slayer type has an "opposite." Wielding a slayer type against its opposite will cause the attacker to take more damage then he or she would otherwise. For example, using an Undead Slayer against a humanoid (Repond) will cause the attacker to take additional damage from the humanoid. The same applies to using an Ophidian Slayer against a Terathan. (This limits the usefulness in combat of the Berserker's Bardiche, an artifact found during the Ophidian War event cycle.)

Super Slayers apply to whole groups of creatures. The Lesser Slayers are creature specific. They will say the name of the creature then slayer. For example: "Lizardman Slayer."

Until the Stygian Abyss expansion, all Slayers did double damage to applicable monsters. However, following that expansion, Lesser Slayers do triple damage, and Super Slayers still do double damage. The manufacturers stated explicitly that this was intended to increase the value of the Lesser Slayers, which were increasingly looked down upon by players (with a few notable exceptions, such as Scorpion Slayer, Spider Slayer, and Dragon Slayer, all of which had particular uses).